After a year of conversational to and fro between Lainé and the c-o-m-p-o-s-i-t-e team - exchanging ideas, experiences, references, literature, etc. to ‘think with’ both her artistic work and our practice in staging exhibitions - the past few weeks she has been making a sculpture in the gallery space, leaving all the traces of her work and thought process on site.
Instead of “a whale washed ashore”, the sculpture is surrounded by what brought it into being, because, as she puts it, “all of that makes the sculpture”. In that sense, Lainé’s sculptural practice can be said to be seamless not only in that it is situated in the very act of breaking down divides between studio and exhibition practice, but it is also questioning those canonical partitions erected between what’s inside and outside of the mind. In contrast to a brain scan, the installation can be read as a materially and photographically rendered ‘exploded view’ of cranial activity during sculptural practice: “it is an allegory of thought, an allegory of the brain”, she contends. Or of how the mind can extend into the world.
(...)
(Don’t cheat me out of the fullness of my capacity!  Words by Greg Nijs) 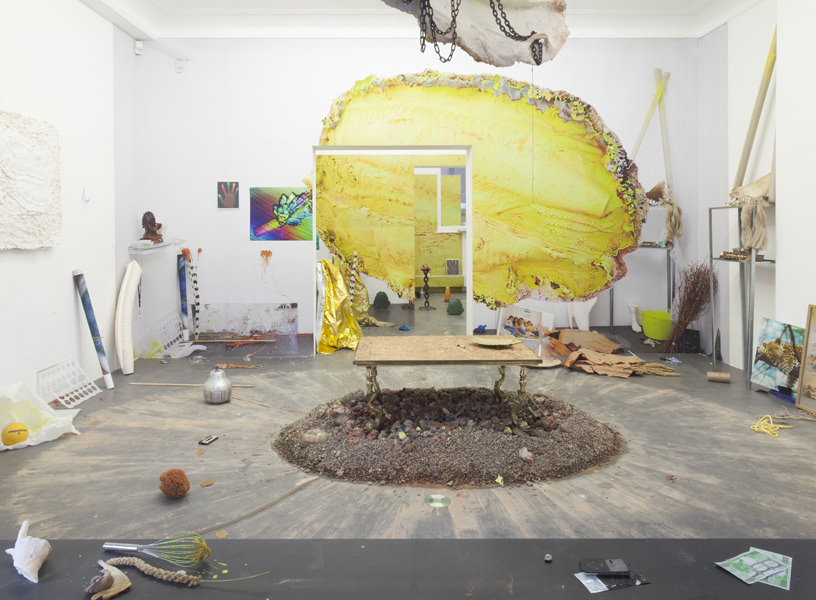 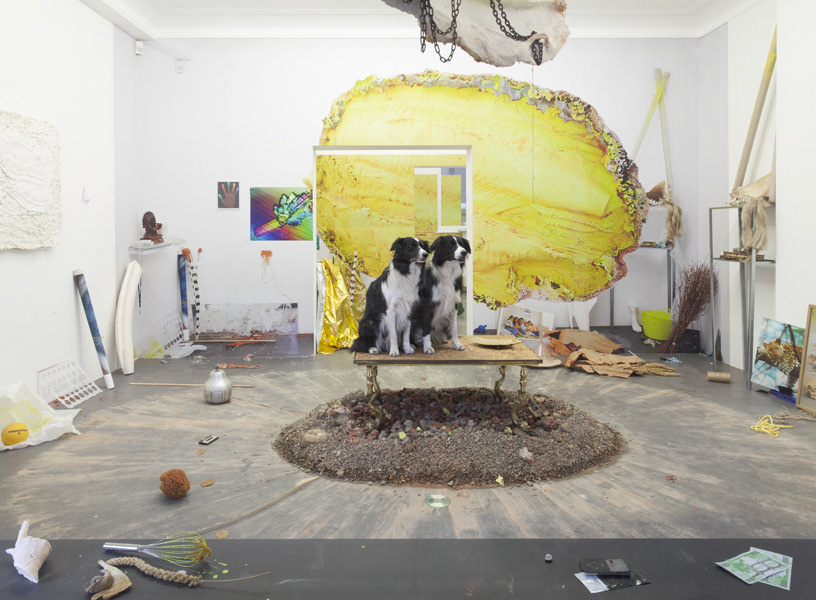 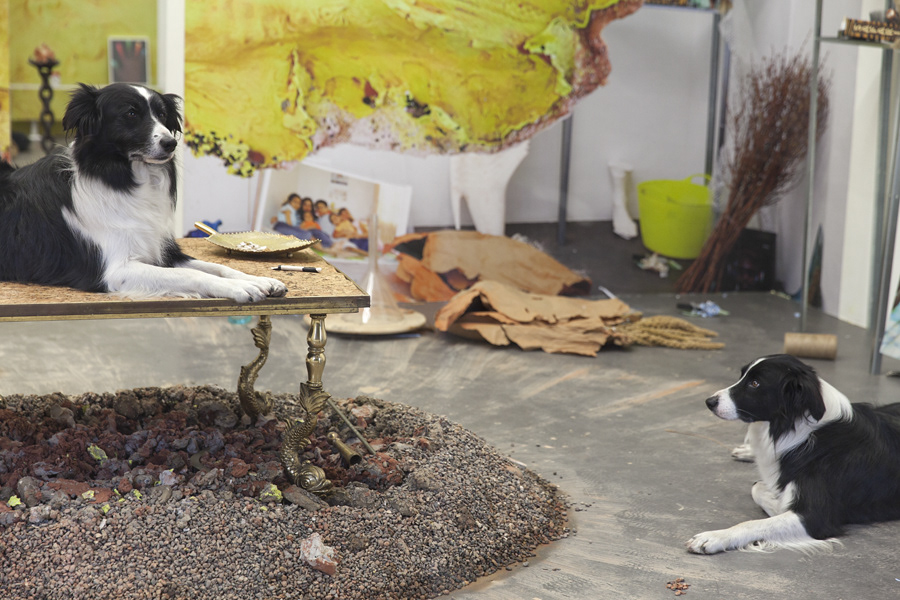 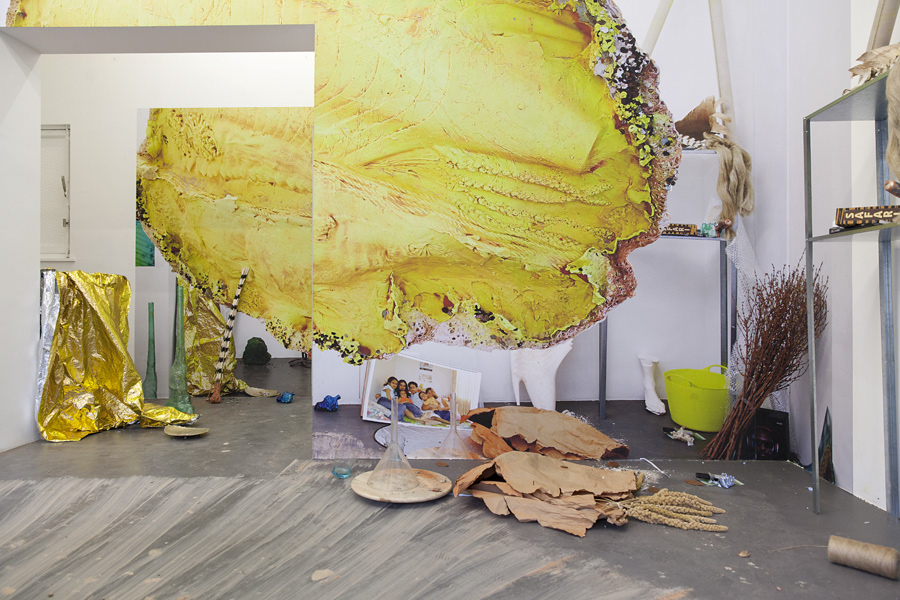 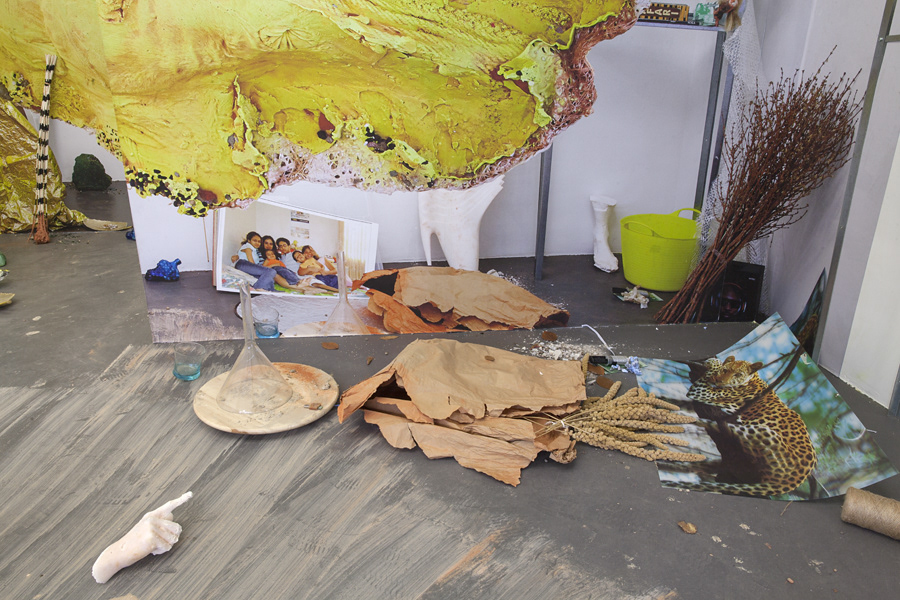 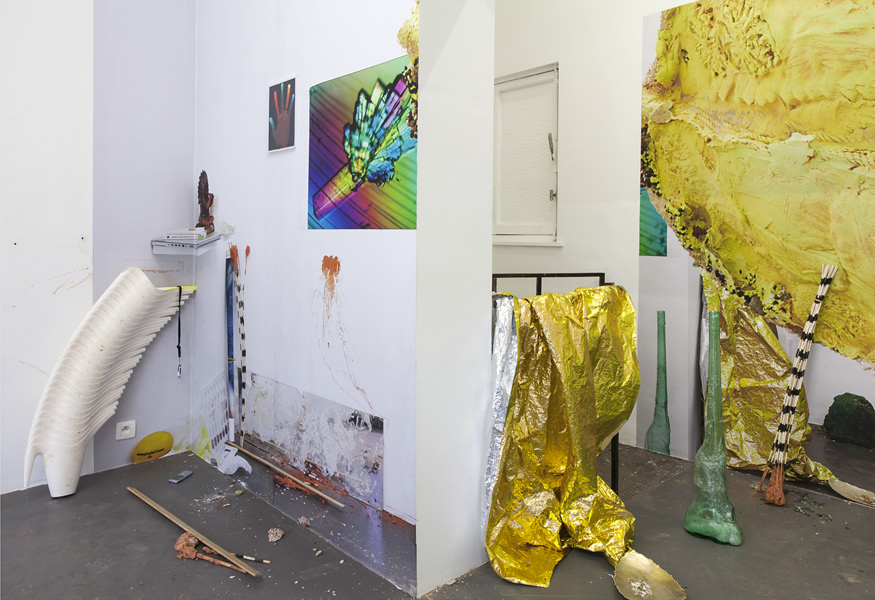 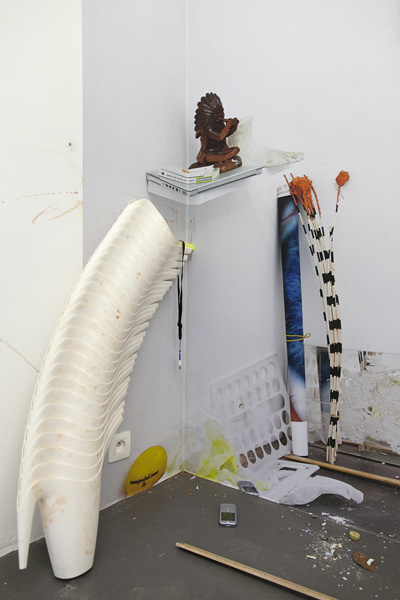 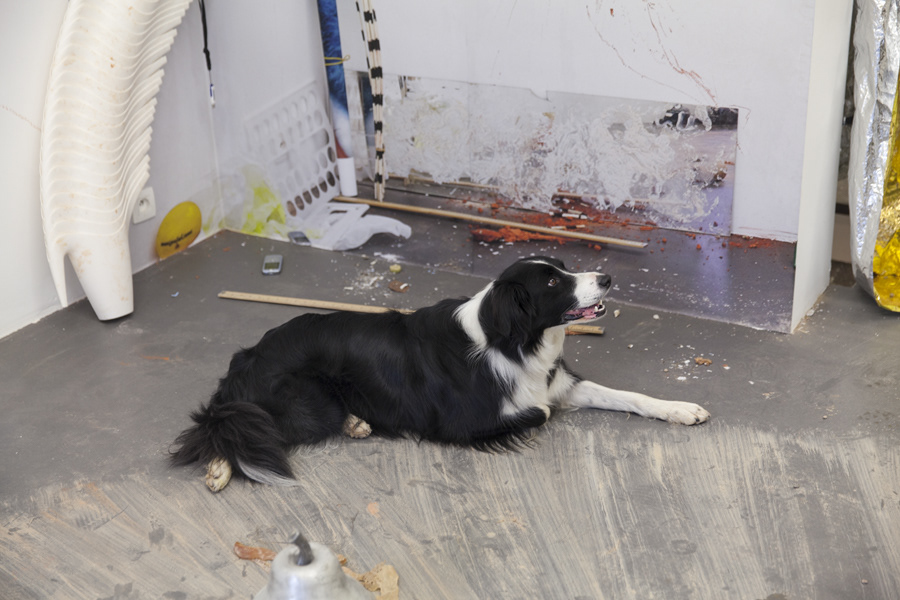 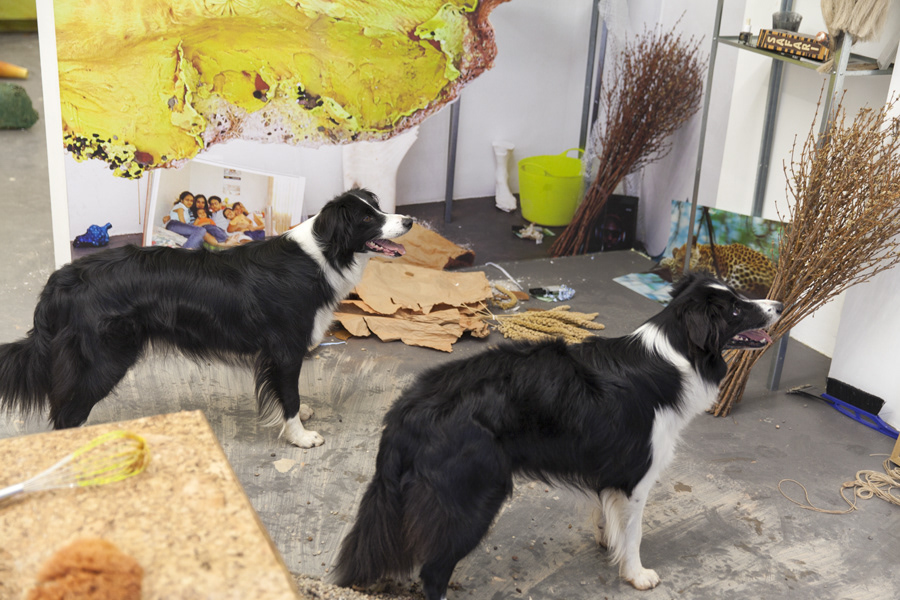 (...)
The installation, in its final stage, covers the whole ground floor. Scattered over the different rooms, there is a comprehensive collection of domestic objects that act as (re)sources to infuse the sculptural mould. Wallpapered behind the installation is a blown up photographic reproduction of the installation, showing the elements that were present during the whole process (some of which have meanwhile been moved or removed).
In the center, a mass of red clay is dammed up by a gravel embankment, which is functional to the moulding process, encircled by the dried residue of water and clay emulsion, radiating inwards. Above, suspended from the ceiling, a yellow sculpture. Lainé’s sculpting process first involves the accumulation of objects, species, devices, and images (which could all well populate and adorn contemporary or bygone domestic material culture) that have been found, grown, or made at some point in recent history.
They act as material snippets of Lainé’s thought. Snippets that incarnate postcolonial, posthumanist, and technoscientific resonances, embodying her pondering over present-day debates in art and beyond. The objects are then constantly arranged and re-arranged spatially: “I don’t brush or tidy up, once I’m working.
The objects just move around. It’s quite messy”. She physically moves around her thoughts, as it were: “it is about reflecting in motion. There, where an object is placed, is at the end of a movement”. An ‘ambulatory conceptualisation’, in which scissions propagated by canonical Western thought – i.e. between action & thought, concrete & abstract, object & subject, matter & language – are replaced by a continuity principle. Hereby Lainé shifts emphases from the end terms to what happens in between.

Intermittently, an arbitrary aggregate of objects is imprinted in the clay mass, after which the imprint is cast in acrylic resin. Perhaps, in this context, it may be appropriate to refer
to the practice of alchemy. The moulding of the sculpture can be said to be analogous to alchemy, as a contemporary instauration of a practice too often unfairly derided in modern times.
Beyond modern mockery, the gravel and clay pit can be considered as the crucible in which Lainé subjects organic and inorganic components to alchemical transmutation. The resulting sculpture seems to be neither fish nor flesh when it comes to deciding on its make-up. Difficult to tell whether natural or artificial, grown or manufactured. It is at once one and the other. Attention is drawn to its melded hybridity instead, in which the individual qualities of the components used give way to an entirely new entity. A ‘naturecultural sculpture’ would be the closest to a generic definition one could come up with.

The scultpure thereupon is hoisted out of the gravel and clay pit in which it has been moulded. Suspended from the middle and above. Then the whole installation is captured with a large format digital view camera in one shot. The photograph is partly blown up, subsequently printed in large scale and differentially wallpapered on the back walls of each room. A flat photographic rendition with hints of curviness at the fringes. Presenting the photograph along with the sculpture and the physical objects brings about a concurrent physical and virtual space, in which it is not a question of opposition between both. “It is rather a question of extension”.
Again, it has to do with continuity, like the continuity between the material and the mental or the overwriting of unnecessary inside/outside divides. Seamlessness between the physical and virtual real is enacted. The fact that Lainé shows the photograph together with the installation, which she reconfigures again after the image is wallpapered, adds a level of complexity to the rendering and installation process. “So I’ve become more conscious about the objects’ movements”, although she cannot anticipate what will end up where. It is a matter of refraction, of obliquely passing through an interface between different media.

Looping back to Lainé’s words: “all of that makes the sculpture”. If the whole installation is an allegory, it is not one in the classical sense. “There is something clumsy and hopeless in [classical] allegory. You try to represent an idea or a concept you have, but it is never possible to exactly translate what you want to get across”. So it suits Lainé better to talk of an ‘experimental allegory’: “it is rather an attempt to understand something of which you don’t have the meaning. But you can’t understand. It can only be approached metaphorically, allegorically”. Since we do not have access to things
themselves, be they physical or mental, the only way to leave room for them, and for the thoughts that are externalized through them, is to proceed obliquely
Although one could dub it a sprawling installation, Lainé likes “the comfort of working in a confined space”. Sprawling, yet confined. Together with the vitrine, it makes the installation into an ‘in vitro experiment’. Like a petri dish breeding bacteria, or a test tube that emulsifies an array of known substances into a new, experimental compound. Furthermore, if it is an allegory of thought, it is not so much a window on the mind, looking at how the world is projected onto the brain. Rather, the lens and
focus are inverted, looking at how the mind is extended into the world, and thereby, how the world is worded.
The whole scene suggests traces of past sculptural and cognitive activity, leaving somewhat up for grabs what it expresses. What’s remaining is a set of clues inviting the spectator to imagine the activity that took place, and what drove it. The spectator’s work, then, becomes like archeological work, looking at and moving through a scene of which s/he can only barely directly make sense of; observing and wandering through an ‘interiority outside’. Only through speculative inference can
↑Back to Top